The History of Hanukkah 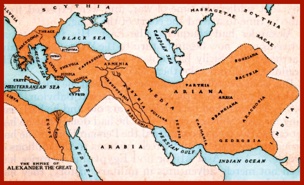 Alexander the Great1356-323 BC conquered most of the known world several centuries before Yeshua’s birth. Under his control he permittedtheir own religions and they retained acertain degree of autonomy. With this relatively benevolent rule, many Jews assimilated much ofthe Hellenistic culture, adopting the language, the customs and the dress of the Greeks. His death led to the breakup of the Greek empire being divided among his four generals2known in Greek as Diadokhoi, meaning Successors: Lysimachus, Cassander, Ptolemy and Seleucus.

... Lysimachus took Thrace and much of Asia Minor; Cassander, Macedonia and Greece; Ptolemy seized Egypt, Israel, Cilicia, Petra, and Cyprus3thus beginning the Ptolemaic Dynasty in Egypt which lasted until the death of Cleopatra VII in 31 BC while Seleucus took control of the rest of Asia4founding the Seleucid Empire which comprised of Syria, Babylon, Persia, India and eventually Israel.

Under the auspices of Ptolemy II Philadelphus, the Hebrew Scripture were translated into Koine Greek (Septuagint). Subsequently, the Greek translation was in circulation amongthe Alexandrian Jews who were fluent in Koine Greek but not in Hebrew, the former being the lingua franca of Alexandria, Egypt and the Eastern Mediterranean at the time. The impact of the translation on the Hellenic World was incalculable. It prepared the world for the coming Saviour and Redeemer revealing how to translate the Names of the One true God into Greek.

Joshua, the son of Nun's original name, was Hoshea, meaning Salvation. Moshe changed his name to Yehoshua meaning Yahweh is Salvation (Numbers 13:16). Naturally, satan was not content to allow this great translation to go unchallenged. His champion to wipe out the Scriptures was a man by the name of Antiochus Epiphanes. 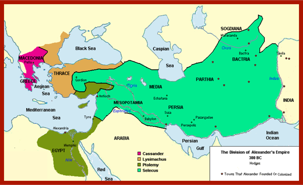 The Land of Israel was sandwiched between the two great rival Empires and, for the next 125 years, the Seleucids and Ptolemies battled for this prize. The Seleucids finally took control in 198 BC when Antiochus III defeated the Egyptians and incorporated Judea (Israel) into his empire. Antiochus, called himself Epiphanes, meaning God Manifest, however, many Jews disposed him and referred to him as Epimanes, meaning the Madman. Like Haman in the Book of Esther, Antiochus sought to destroy all the Jews.

... 1 Maccabees 1:20-25 — In the year 143, after the conquest of Egypt, Antiochus marched with a great army against the land of Israel and the city of Jerusalem. In his arrogance, he entered the Temple and took away the Golden Altar, the Menorah with all its equipment, the table for shewbread, the cups and bowls, the gold fire pans, the curtain, and the crowns. He also stripped all the gold from the front of the Temple and carried off the silver and gold and everything else of value, including all the treasures that he could find stored there. Then he took it all to his own country. He also massacred many people and boasted arrogantly about it. There was great mourning everywhere in the land of Israel.

In order to subjugate the Jews he began a program of Hellenisation (from the Greek word Hellas, for Greece). Whilst many Jews were seduced by the virtues of Hellenism, the extreme measures adopted by Antiochus helped unite the people. Hellenisation threatened to force the Jews to abandon monotheism for the Greeks' paganism. He outlawed Jewish customs and observances such as Sabbath, Circumcision, and Kosher Laws. He didn’t want any religious practices except the Greek ways.

He destroyed Torah scrolls — 1 Maccabees 1:56-57 — Any books of the Law which were found were torn up and burned, and anyone who was caught with a copy of the sacred books or who obeyed the Law was put to death by order of the king. He placed heathen altars everywhere, made Jews bow down before Greek gods, placed a statue of Zeus in the Temple, (a wrathful god, the head of the Greek pantheon, his followers called him Father). Finally he sacrificed a pig in the Holy of Holies, the place of God’s Presence. 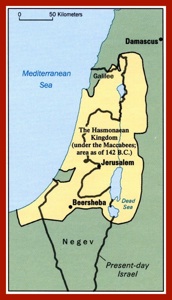 1 Maccabees 1:54 — On the fifteenth day of the month of Kislev5November/December in the year 145, King Antiochus set up the abomination of desolation on the altar of the Temple, and pagan altars were built in the towns throughout Judea.

When a Greek official in the town of Modiin tried to force Mattathias, a righteous priest of Israel, a descendent of Moses’ brother Aaron, to sacrifice to the Greek gods, he could take it no longer. Just as Phinehas had done a before, when unholiness was being foisted on Israel (Numbers 25:6–9), Mattathias rose up and killed the Greek official. Predictably, Antiochus began reprisals, but in 167 BCE the Jews rose up behind Mattathias and his five sons; Jochanan, Simeon, Eleazar, Jonathan and Judah who fought for their liberation.

The family of Mattathias became known as ...

... the Maccabees, from the Hebrew word for hammer, because they were said to strike hammer blows against their enemies. Jews refer to the family as the Maccabees, but more accurately they’re the Hasmoneans. Like other rulers before him, Antiochus underestimated the will and strength of his Jewish adversaries and sent a small force to put down the rebellion. When that was annihilated, he led a more powerful army into battle only to be defeated again. In 164 BCE, Jerusalem was recaptured by the Maccabees and the Temple purified on the same day as the desecration.

2 Maccabees 10:5–6 — They rededicated the Temple on the 25th day of the month of Kislev, the same day of the same month on which the Temple had been desecrated. The happy celebration lasted eight days, like the Festival of Shelters. 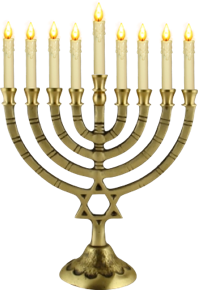 Miraculously, Judah led Israel to victory, upon which, the crowds celebrated by waving Palm branches — this so captured the moment it became forever a symbol of victory over oppression. Judah6The Hammer even had an image of Palm branches stamped onto temple coinage. Tradition records that when the Temple was restored, only one container of oil had the seal of the High Priest, indicating it could be used in the Temple Menorah. But they decided to light the Menorah in faith, and the oneday’s worth of sacred oil miraculously3 lasted 8 days, the time needed to press, process and consecrate enough sacred oil for the Temple to be ritually purified. Hanukkah, an 8 day celebration from Kislev 25—Tevet 3, commemorates this victory.