In Leviticus 23 the Israelites were commanded to celebrate 7 feasts. The Festivals of the Lord were established as yearly rehearsals that taught both historically and prophetically the whole plan of God concerning the coming of the Messiah and the redemption of mankind. The first 4 feasts have been fulfilled and the Jewish community celebrates them historically.

They are Passover, Unleavened Bread, First Fruits and Weeks. These 4 Spring Festivals are considered an interrelated whole where Weeks is the completion of the process begun at Passover.

Three times a year the Israelites were to travel to Jerusalem to celebrate the major festivals; Pesach (Passover), Shavuot (Weeks) and Sukkot (Tabernacles), see Exodus 23:14-16. The wonder of God's amazing revelation in Scripture is that...

... not only has He spoken directly of His plan for mankind, but that He has also given us some beautiful historical pictures of His plan of redemption embedded within the precepts of the Mosaic Law. The ceremonies, rituals and prescribed Festivals each have priceless insights into the life, work, death and resurrection of the coming Messiah-Yeshua. Understanding these prophetic pictures should not just amaze us, they should inform and reassure us that God's plan of redemption through Jesus Christ has unfolded perfectly and will continue to do so.

The last three festivals (Trumpets, Atonement and Tabernacles) are celebrated during autumn and are yet to be fulfilled so they remain prophetic in nature.

God gave the Biblical Festivals to teach the Jewish people and all believers about His character and so understand His plan of salvation. All Christians have been ‘grafted in’ to the Olive Tree (see Romans 11:17ff) and so share that same rich heritage and roots.

Believers in Messiah are not required to keep these feasts, but knowledge of them certainly enriches faith. Yeshua kept every one of them without fail, even celebrating Pesach on His last earthly night.

It was on Mount Sinai that God gave Moses the dates and observances of the seven feasts.

Pesach — Leviticus 23:5; celebrates the turning point in the story of the Israelite freedom after slavery in Egypt. It points to the crucifixion. In both the Old and New Covenants, the blood of the Lamb delivers from slavery – the Jew from Egypt and the Christian from sin.

Chag Ha Matzot — Leviticus 23:6; speaks of the burial of Yeshua and the cancellation of sin. The Feasts of Passover and Unleavened Bread are considered as one and known simply as The Passover. In the B'rit Chadashah1New Covenant Yeshua is described as the Bread of Life (Lechem Ha Chayim) in John 6:35. He was born in Bethlehem, which in Hebrew means, House of Bread (Bet Le Chem). 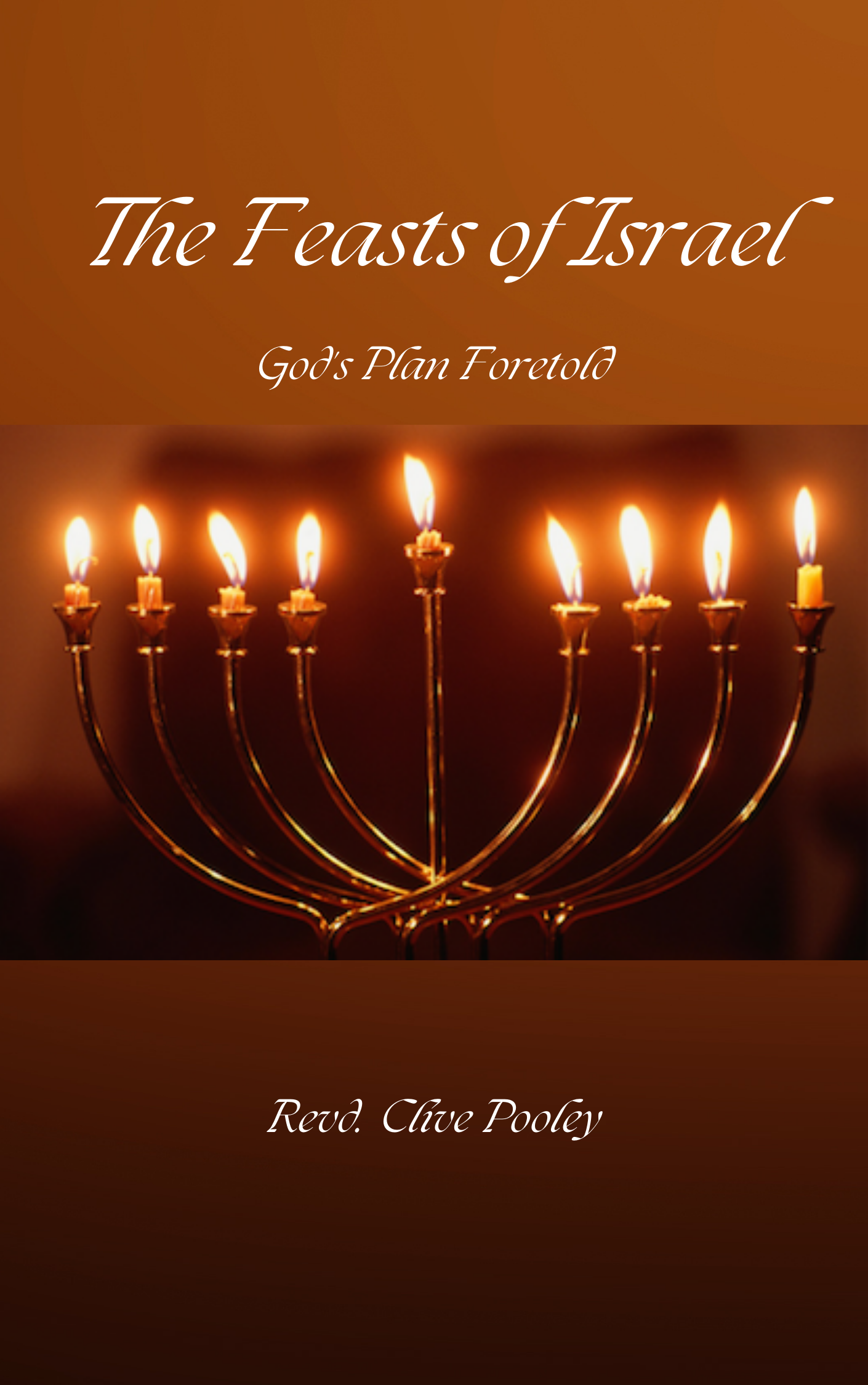 Yom Ha Bikkurim — Leviticus 23:10; pictures the resurrection of Yeshua (being the first of many, Romans 8:29). In ancient times the day following the first day of Unleavened Bread a sheaf (Omer) of barley2The first crop to ripen was waved before the LORD to mark the start of counting the Omer, thereby initiating the 49 day countdown to the Feast of Shavuot. Bikkurim derives from the root word bekhor, meaning ‘firstborn’.

Shofar, (Yom Teruah) — Leviticus 23:23; when the Israelites were commanded to gather together during the blowing of the Shofar3ram’s horns. It speaks currently of the Gospel proclamation that ‘now’ is the day of Salvation (Isaiah 49:8, 2 Corinthians 6:2). In the future it points to the Rapture of the Church. Sounding the trumpet signalled the field workers to come into the Temple — the high priest actually blew the trumpet so the faithful would stop harvesting in order to worship. Now, when the trumpet sounds, in accordance with 1 Corinthians 15:51-53, living believers will cease their labour and be taken out of the world in the Rapture. Rosh Hashannah literally means the Head of the Year, it’s the beginning of a new era and points to Yeshua's return (1 Thessalonians 4:16).

Yom Kippur — Yom meaning Day and Kippur meaning Atonement — Leviticus 23:27-28; the blood of the lambs that made atonement for the peoples’ sins pointed to the blood of the final sacrifice made for sin by Yeshua. This, the holiest day of the Jewish year, reveals a prophetic insight regarding the Second Coming of Yeshua Ha Mashiach, the restoration of Israel and the final judgement of the world. This is the one Feast not fulfilled by the Church as it owes no Atonement. Not that the Church is innocent, but that it’s exonerated. The Day of Atonement will be fulfilled when the Lord returns at His Second Coming with the redemption of His people, Israel (Romans 11:26).

Sukkot — Leviticus 23:34; also known as the Feast of Shelters, celebrated when God brought His people out of Egypt and cared for them in the desert. Chag Ha Asif, or the Festival of Ingathering, also points to an end-time harvest when the nations are all gathered to worship the Lord picturing the Millennial Reign of Yeshua Ha Mashiach. According to a Jewish saying, Rosh Hashannah is the engagement, Yom Kippur the sealing and Sukkot the wedding in the relationship with God. A Jewish wedding lasts for 7 days, the marriage takes place under a Huppah, which sometimes is depicted with a Tallit4Jewish prayer shawl. So the Sukkah can be interpreted prophetically with the 7-day long Feast of Tabernacles being the Wedding Feast of the Lamb (Revelation 19:9): the Groom, Yeshua, who comes for His Bride, the Church. 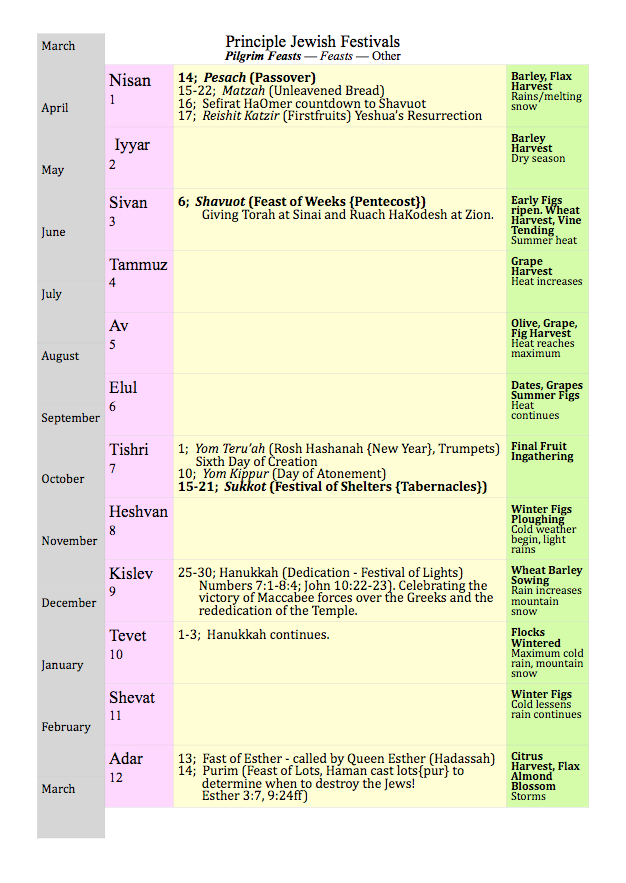 The Sabbath was a weekly celebration of God's work in Creation. God created in six days and rested on the seventh. He then commanded that every seventh day people cease from all normal activity and rest. In this respect, the Sabbath was a memorial of what had happened. But it was also a shadow of what was to come: the rest that would one day come from the work of Messiah.

Yeshua ha Mashiach has now done all of the work necessary for our Salvation. Our Salvation is not only based entirely upon God's grace (Ephesians 2:8-9) it is also based upon the finished work of Messiah. The work of Salvation is now done, therefore, we rest in Messiah.

"Come to me, all you who are weary and burdened, and I will give you rest. 29 Take my yoke upon you and learn from me, for I am gentle and humble in heart, and you will find rest for your souls. 30 For my yoke is easy and my burden is light" (Matthew 11:28-30, NIV).

or as The Message puts it;
"Are you tired? Worn out? Burned out on religion? Come to me. Get away with me and you’ll recover your life. I’ll show you how to take a real rest. Walk with me and work with me—watch how I do it. Learn the unforced rhythms of grace. I won’t lay anything heavy or ill-fitting on you. Keep company with me and you’ll learn to live freely and lightly."