As soon as the Jews left Egypt, a fiery Pillar of Cloud appeared before them, leading them from Rameses to Succoth and then south to the desert. But Pharaoh and his army pursued them in order to enslave them once again. Six days later (Nisan 21) the Israelites were trapped between the Egyptian army and the Red Sea.
(See Exodus 13:20-22; Exodus 14:4)

Shavuot marks one of the most important days in human history. On that day, we celebrate the revelation of God and the giving of the Torah to humanity. The practice of counting the days between Passover and Shavuot is known as counting the Omer. It is named for the barley sacrifice, called the omer that was brought during this time when the Temple stood. At the end of these seven weeks, a new and different offering was brought – one of new grain. But let's not get ahead of ourselves...

The Pillar of Cloud 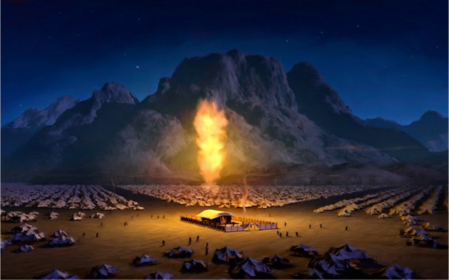 The Pillar of Cloud moved behind the Israelites between them and the Egyptians. Moses stretched out his staff, miraculously the sea parted for them, and they walked through on dry ground. After they had all crossed over, the Egyptians tried to follow but Moses again stretched out his staff and the waters caved in on them and drowned the pursuing army.

After 45 days in the desert they reached Mount Sinai (Exodus 19:1) and Moses ascendedthe mountain where God gave him the Ten Commandments and eventually Torah. Passover is seen Israel’s betrothal to God whereas Shavuot is considered the Wedding Anniversary of the Covenant between God and Israel sealed at Mount Sinai.

The Ketubah or wedding contract was the Ten Commandments and Torah, Sephardic Jews often recite Hosea 2:19-20 at this point.

Shavuot is also known as the Conclusion of Passover as God’s intention in the Exodus was His revelation at Sinai.

Shavuot marks the end of the barley harvest and the beginning of the wheat harvest. Counting the Omer begins with a wave offering of barley and continues for 7 weeks (49 days) until the wheat offering on Shavuot (Deuteronomy 16:9-10). 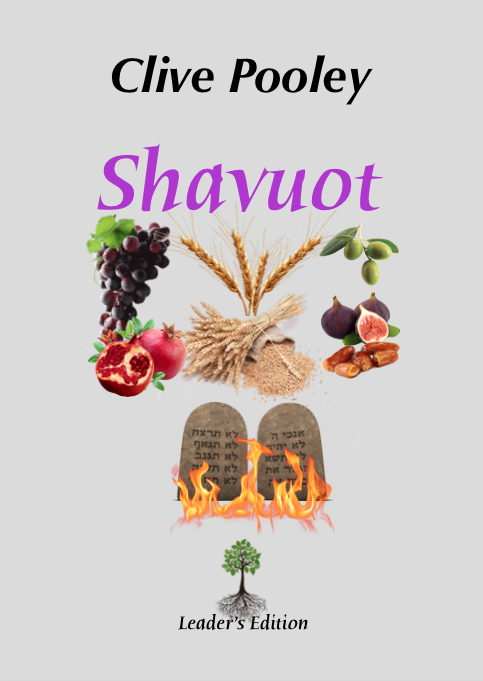 Surely, it would make much more sense to say, 49 days left until the big day, now 48, only 47 left, and so on. Yet the Bible commands us to start at 1 and count out loud every day until we reach 50. Something changes in these intermediate weeks. They are intended to be introspective and transformational, so much so that what a person can offer God in the beginning is profoundly different by the end. At the beginning of the 50 days, a journey begins. By the end, we are ready to receive the Word of God.

That’s why we count up, and not down. As each day passes, we become more, not less. Like climbing the rungs on a ladder, we ascend toward Heaven one step at a time. By the time we reach the top we can appreciate the distance that we have travelled. Passover celebrates our physical redemption, but it takes seven weeks until we are able to experience our spiritual redemption on Shavuot. 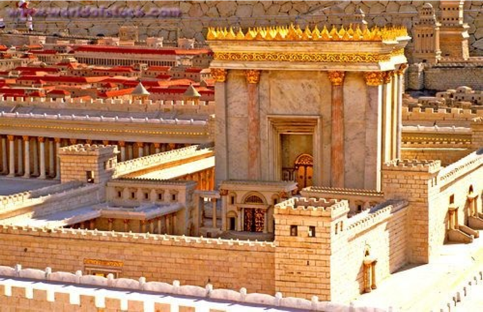 At the Temple, the priest took the sheaves, the firstfruits of the harvest, and waved some in every direction for the crowds to acknowledge God's faithful provision and sovereignty over all the earth. The priests also waved 2 loaves baked with yeast before the Lord in such a way that they appeared to become one loaf!

The two loaves can be seen as the Jews and the Gentiles in the Kingdom (Romans 11:17ff) the natural and in-grafted branches being supported by the holy root of the Patriarchs and the Remnant of Israel.

Today, Jewish men traditionally stay up all night studying Torah. The story of Ruth is read as it is set during the harvest season. She left Moab, her homeland and followed her mother-in-law Naomi to Israel after the deaths of their husbands. In Bethlehem, she married Boaz, one of their closest relatives, a kinsman-redeemer from the Royal House of Judah.

More on Ruth and Boaz

Their grandson was King David1Tradition says he was born and died on Shavuot. and from the line of King David also comes Messiah Yeshua. It’s a message of sacrifice and redemption as Ruth, a Gentile, said to Naomi; Your people will be my people, your God will be my God. Boaz typifies the loving-kindness of Yeshua our Redeemer.

At Shavuot the Lord demonstrated He had not finished with Israel. He proved His Covenant Faithfulness by making His New Covenant (Jeremiah 31) with the people He had rescued from Egypt and restored from exile:And everyone who calls on the name of the Lord will be saved;for on Mount Zion and in Jerusalem there will be deliverance, as the Lord has said,even among the survivors whom the Lord calls (Joel 2:32).

We think Pentecost is about the birth of the Church, and it is, but perhaps it's also about the rebirth of Israel!

The Keynote and accompanying Leader’s Edition booklet give all you need to host an evening that will include worship and food as well as be informative.

In Mosaic Law, God instructed His people; Make tassels on the corners of your garments and put a blue cord on each tassel. You are to do this for all time to come. This was to serve as a reminder of their religious obligations and responsibilities, that they were God’s people who’d been rescued from slavery in Egypt and called to keep His commandments. (Numbers 15:37-41, see also Deuteronomy 22:12)

This outer garment became known as ...

... a tallit, and eventually evolved into the prayer shawl. The tassels are tied into 613 knots, a reminder of the 613 Laws of Moses, of which there are 365 prohibitions2you shall not laws, and 248 affirmations2you shall laws. The knots also correspond with the ineffable name of God, the unspoken yod-hey-vav-hey, Yahweh.

Jewish men use prayer shawls to cover their heads, shut out the world and so be in God’s Presence. These prayer shawls3tallit are white, representing the Heavens, or the dwelling place of God; the colour blue represents the Ruach HaKodesh4Holy Spirit. The tallit could easily be what Yeshua was referring to in Matthew 6:6, when He said go into your inner room, separate from the people around, and pray in secret to your Father.

In the Ancient Near East a person’s garment was significant in that the corner tassels were representative of identity and authority.

Ruth went to Boaz to receive his blessing that would help her out of her difficult situation. She went to the threshing floor and slept at his feet. "In the middle of the night something startled the man, and he turned and discovered a woman lying at his feet. 'Who are you?' he asked. 'I am your handmaid, Ruth,' she said. 'Spread the corner of your garment over me, since you are a kinsman-redeemer’” (Ruth 3:8-9). She was asking him to identify with her. (The same Hebrew word means wing or corner of a garment.)​

Boaz immediately understood and replied: Don't be afraid. I will do for you all you ask. All my fellow townsmen know that you are a woman of noble character (Ruth 3:11).

What Ruth did in asking Boaz to spread the corner of his garment over her was a symbolic way of saying she was placing herself under Boaz's authority. He did everything necessary and eventually married her.

When God spoke of making a Covenant with Israel, He pictured Himself as spreading the corner of His garment over her (Ezekiel 16:8)—a symbol of identifying with her as His bride.

So important were the corners of a Jewish man’s garment in ancient Israel that the Old Testament closes with a prophecy of the Messiah that references the corners of His garment (Malachi 4:2);
But to you who fear My name
​The Sun of Righteousness shall arise with healing in His wings.

The Hebrew word for wings used in this passage is kanaf a word which specifically means the fringe-like feathers or edges of a bird's wing, not the whole wing — just like eagle or hawk circles in the sky utilising their fringe-like feathers. This word could be translated — wings or fringes.

At the heart of the Messiah’s identity would be healing—spiritual and eventually physical—for all who trusted Him.​