Yom Teru'ah basically means a day of noise or blasts from the ram's horn. Yom Teru'ah also known as the Feast of Trumpets is better known as Rosh Hashannah (the New Year) in modern Judaism. But Yom Teru'ah isn't really the Jewish New Year, in fact, it falls on the first day of Tishri which is the seventh month of the year.

Yahweh spoke to Moses, Tell the Israelites: On the first day of the seventh month hold a worship festival. It will be a memorial day, a holy assembly announced by the blowing of ram's horns. Don't do any regular work. Bring a sacrifice by fire to Yahweh.
(Leviticus 23:23-25)

But Yom Teruah is not really the Jewish New Year, in fact, it falls on the first day of Tishri which is the seventh month of the year. The real New Year is in Aviv1Also known traditionally as Nisan. when Pesach/Passover occurs.

Numbers 29:1 says that this is a day of blowing trumpets. However what is explained, is the call of the shofar. Watch the video to find out more about the Biblical importance of the Feast of Trumpets.

In traditional Judaism, Rosh Hashanah, meaning the head of the year, is celebrated as Jewish New Years Day. The holiday is observed on the first two days of the Hebrew month of Tishri which usually falls in September or October.

The term Rosh Hashanah does not occur in the Torah. It appears in Ezekiel Chapter 40 where actually it refers to the Spring season that is Aviv, the original beginning of the Calendar. The Torah defines the holiday in the seventh month simply as Yom Teruah, the festival of the blowing of the shofar, without going into any further explanation.

... Yom Teruah begins a 10 day period leading up to the holiest day of the year, Yom Kippur (Day Of Atonement). These 10 days are referred to as Yamim Norai'm, the Days of Awe, or the High Holy Days. The sounding of the shofar on Yom Teruah is a wake-up call — a reminder that the time is near for the Day of Atonement. It’s time for Teshuvah2Repent, turn back to YHVH. Traditionally, these 10 days are of heart searching and self examination — the Shofar serves a reminder for lives to be examined and thereby make amends with all those that have been wronged the previous year, and asking for forgiveness for any vows that may have been broken. Tradition states that the universe was created by God on Rosh Hashannah marking the sixth day of Creation, when the LORD created Adam and Eve. 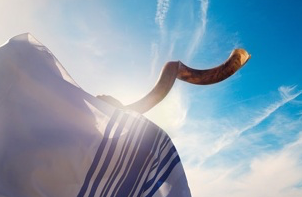 There are actually two New Years in Judaism. One, according to Biblical time reckoning, begins on the first day of the month of Nisan or sometimes it is referred to as Abib, which means Spring. Nisan is roughly equivalent to our April. Exodus 12:1-2

The other New Year’s Day is Rosh Hashanah, which literally means Head of the Year. Most Jewish people recognize and celebrate this, the 7th day of the 7th month, Tishri.

In Leviticus 23:24; Say to the Israelites: On the first day of the seventh month you are to have a day of sabbath rest, a sacred assembly commemorated with trumpet blasts.

The Rabbis of old believed God created the world in the first week of the month of Tishri. Therefore, the first day of the 7th month is considered the beginning of Creation and therefore the beginning of the year; hence the present Jewish reckoning of time.

The Jewish year is a lunar year which is ...

... shorter than the solar year by 10 days and 21 hours. The year is divided into 12 lunar months of 28 or 29 days each. To equalize the difference between the lunar and the solar year, about every 3 years an extra month is added between the 12th month, or March. This 13 month year is the Jewish leap year.

Tishri, being the 7th month is a Sabbatical month. What the 7th day is to the week, Tishri, the 7th month, is to the year. Hence the first day is celebrated as a Sabbath, a day of rest and a memorial calling for the blowing of trumpets, with a holy gathering.

In Nehemiah 8:1-12 we read that after Israel returned from Babylonian captivity they began again to observe the New Year’s Day solemnly. And when the Law was read to them after such a long period of neglect, they broke down and wept as they repented.

It was Ezra, their leader, who eventually had to comfort them and remind them that this was also a day of great rejoicing and thanksgiving to the Lord and that they were to go home comforted and eat with gladdened hearts.

Significance of Blowing the Shofar 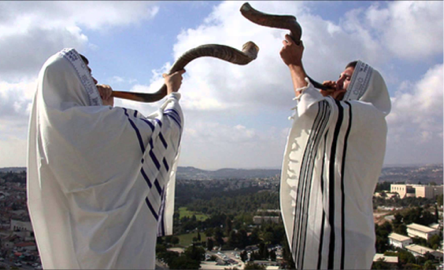 According to the rabbis, the blowing of the horns and trumpets was ordained by the Lord and observed in the Temple in Jerusalem and throughout the Land of Israel and it has a 3 fold purpose.

The general custom is to first blow Tekiah, followed by Shevarim, then Teruah and close with Tekiah ha-Gadol.

Shofar4Trumpets— Yom Teruah — Leviticus 23:23; the Israelites were commanded to gather together during the blowing of the Shofar5Ram’s Horn. It speaks currently of the Gospel Proclamation that now is the day of Salvation (Isaiah 49:8, 2 Corinthians 6:2).

In the future it points to ...

... the Rapture. Sounding the trumpet signaled the field workers to stop harvesting and come into the Temple to worship. Now, when the trumpet sounds, believers will cease their labour and be taken out of the world in the Rapture. Rosh Hashanah literally meaning Head of the Year points to the beginning of a new era and anticipates Yeshua's return.

1 Thessalonians 4:16… the Lord Himself shall come down from Heaven with a commanding shout, with the voice of the archangel and with the blast of God’s shofar, and the dead in Messiah shall rise first. Then we who are alive, who are left behind, will be caught up together with them in the clouds, to meet the Lord in the air—and so we shall always be with the Lord.